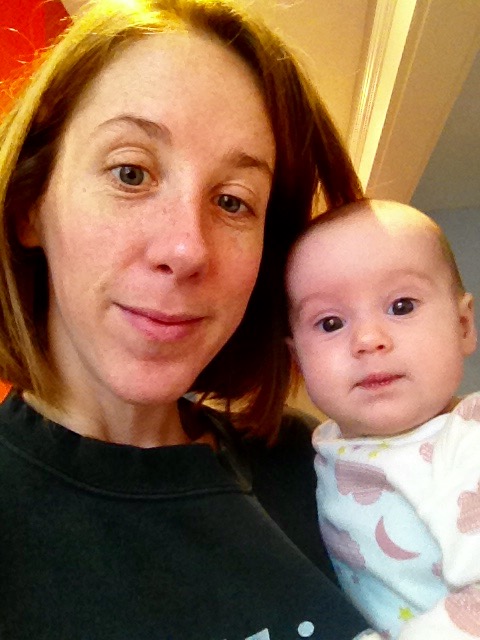 Whenever I go out with my mom, people comment on how alike we look — they always have. And that’s great, because I think my mom is a total fox. But sometimes, she doesn’t think so. That was painful to hear growing up, and it made me second-guess my own beauty.

She would do the “polite” thing when we were out together and someone would say, “Wow she looks just like you!” She would self-deprecate, “Ugh, I bet she loves to hear that.” Or, “She hears that all too often.” I think that’s how many women respond, because it seems egotistical to reply any other way. I didn’t think anything of it at the time, but then I caught myself doing it.

My daughter is 9 months old and looks exactly like me, just with darker, brunette features. I think she is a stunning beauty — much more beautiful than I am. But when someone says, “Wow, she’s a carbon copy of you!” I, in an attempt at a joke, respond, “Haha, I know… sorry, Elle!” And everyone laughs and it’s no big deal. Except that it is.

This person is unknowingly making an explicit comment on my daughter’s appearance by comparing it to my own. Here, I have the perfect opportunity to encourage my daughter’s positive self-image, and I pass on it out of a misguided sense of humility or fear of being thought “full of myself.” But what matters in the moment isn’t the impression I make on the stranger (or friend, or family member who might do the same). It’s my daughter, who is watching with big eyes.

At only 9 months old, she doesn’t understand my response. But soon, she will look to me to inform her own self-image and how she should think about and respond to comments on her appearance. Not to mention my 3.5-year-old son, who is also listening closely to how women should feel about themselves and their appearance. And that’s enough to scare me into rethinking how I react in these situations.

So I’m making myself stop. The next time someone compliments my beautiful daughter, or compares her to me, chances are I’ll be makeup-less and sleep-deprived. I probably won’t feel like I look terrific. But I’m going to say, “Thank you. I think she is beautiful inside and out.” And if I say that often enough, maybe there’s a chance she’ll see that it’s a good thing to accept a compliment. That it’s OK to internalize it. And if she internalizes it, maybe I’ll get some small satisfaction out of knowing I helped bolster her against a world that will try to tell her that her self-worth depends on what others think.