I met my husband 10 years ago this December at a Christmas party. After a few drinks I remember asking him what he was doing for Christmas. His response: “I don’t celebrate Christmas, I’m Jewish.” Pump the breaks. I was born and raised in southern New Hampshire, a mere one-hour drive from Boston, but I’d had little introduction to the Jewish faith. Fast forward 10 years later and I yell, “Mazel!” when I clink glasses.

I was raised Catholic, attended CCD weekly, and made my Confirmation. My husband is Jewish but was raised in a less religious household — they celebrated Jewish holidays but he did not attend Hebrew school. We had many discussions while dating about how we wanted to raise our children, and, honestly, it’s a continuous dialogue. 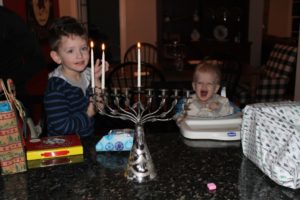 Now, like many Americans, we are an “interfaith family.” We have tried to teach the our children about both religions and traditions. This December we will be lighting the menorah for Hanukkah and lighting the tree on Christmas. My kids may be the only ones in the neighborhood spinning the dreidel while listening to “Little Drummer Boy,” but that’s fine with us. The most important part of the holidays is spending time together, as a family. Every night during Hanukkah we light the menorah as a family and recite the Hanukkah prayer. The kids get a small gift each night and my husband explains what Hanukkah is all about (in terms that a 4-year-old would understand). We try to have my in-laws over for at least one night to celebrate with us as well. On Christmas Eve my family comes over and we exchange one Christmas present before the big day. Whether we’re stuffing our mouths with latkes or sprinkled fudge, sharing and making memories with family is the centerpiece of our holiday season. 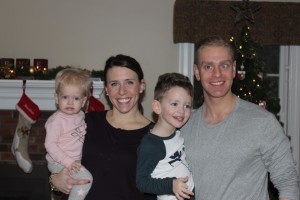 Thanks to the PJ Library, my kids receive Jewish literature (or sometimes music) every month that they look forward to exploring. Often times it’s about a Jewish holiday or it revolves around values intrinsic to the Jewish faith. We also read traditional Christmas books and watch Christmas movies to explain what Christmas is about.

By celebrating both religious holidays we teach our children to respect differences, not only cultural but also personal. One aspect of the holidays is universal across all houses, though — laughter and cheer. 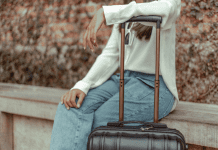 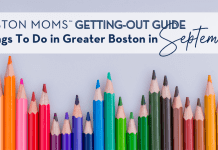