As I watched my 2-year-old scamper around the Christmas tree farm, intent on picking out the perfect tree, I began to realize how much the magic of the holiday season has come alive for my children this year. Moments later, I glimpsed my 8-month-old laughing with rosy cheeks and sparkling blue eyes as he watched his brother’s every move — which included trying hot cocoa for the first time. I am focused on capturing these magical moments with my family. 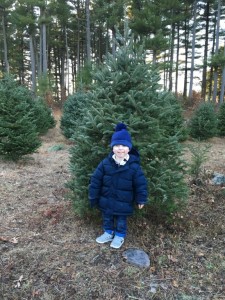 Before having kids, most holiday seasons were like every other to me. But it’s now become amazing to me, and I can see so clearly how the innocence, pure joy, and wonder of children creates a magical lens on this beautiful time of the year.

So what are some of the ways the magic has come alive in my house this year?

While we have had our Elf on the Shelf for three years now, this is the first year he has earned an official name, personality, and purpose. Jack, my 2-year-old, chose the moniker “Pete” without even thinking twice, and ever since then Pete has been another member of our family. Jack and Pete talk about Santa together, about the reindeer and the North Pole, and about all the presents Santa will hopefully bring. And most nights, Pete even gets creative with where he lands after flying back to our house from the North Pole!

Mrs. Claus visits our house when my 2-year-old sleeps in his bed all night

We’ve been talking about Santa and all things Christmas since mid-summer, and Mrs. Claus has come up quite often as someone who bakes the cookies for Santa and who can see what children are up to during the day and night. That said, when a certain 2-year-old in our house struggled with waking up often during the night and not wanting to stay in his own room and bed, Mrs. Claus told us she would visit with a small present if this changed course. Since then, most mornings she brings a small trinket — a book or ball, a piece of candy, or a small toy — and everyone is a bit more well rested.

For most of the duration of the Faneuil Hall tree lighting dress rehearsal my family and I attended, my 2-year-old was staring up into the sky — not at the gigantic tree, but at the roofs of the various buildings surrounding us. Every so often he would quip, “Jack needs to get a ladder, to go to the roof to see the reindeer.” And the packed crowd at the event was probably the only thing holding him back from doing so when he wasn’t in the stroller! 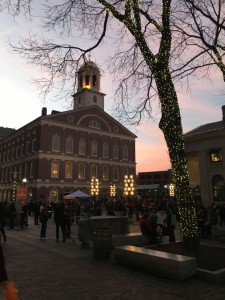 We know more verses than ever before to traditional Christmas songs

Due to the constant request that we sing specific holiday songs, I’ve come to learn more verses to songs I’ve sung for three decades than ever before. For instance, who knew about a “Fanny Bright” and an “upsot horse” in “Jingle Bells”? Not me (that’s for sure!) until I looked up all the lyrics per request of my kids. And as soon as I begin with “Dashing through the snow…” my 8-month-old starts squealing and matching my tune.

And this similarly happens when my 2-year-old tells his baby brother to, “Better watch out, better not cry”

When I heard this interaction between my boys for the first time, complete with giggling and squealing, it stopped me in my tracks. Jack has been telling Logan all about Santa for months now, and we’ve been reading books about Santa, elves, and reindeer — even about Santa bringing presents to the children of Boston — but never before had I seen this big brotherly advice dispensed so sweetly until we started singing, “Santa Claus Is Coming to Town.” Now the true test will be when we go to visit Santa, if Logan sits on Santa’s lap as Jack has instructed him to do for the past several months.

The joy and wonder of children seems to stop time for a little while during the holiday season. It allows me to hearken back to my own childhood and relive the magic of this “most wonderful time of the year.” So with this, I wish all of you and yours a peaceful, joyous, and magical holiday season! 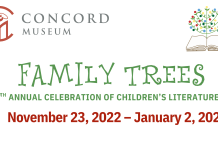 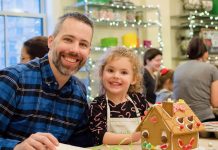 Kristen D - February 6, 2023
My husband and I are not natural skiers. I was born and raised in North Carolina and have never been a skier. My husband...