Perhaps the word “loved” is an understatement here. My dad lived and breathed for the chocolatey-puddingy goodness of a Boston cream anything. Pies, doughnuts, cakes — if it was labeled Boston cream, he was game. At the mere mention of the confection, his eyes would light up like a kid on Christmas morning, and he would tap his fingers together in joyful anticipation of the deliciousness to come. One of my favorite childhood memories is of him happily hopping into the car to drive downtown and get a box of “the best Boston cream doughnuts goin’!” on a weekend morning.

My dad passed away in 2012, and every year since, I have honored his birthday with a Boston cream doughnut toast.

I recently found out October 23 is National Boston Cream Pie Day. So, in honor of my dad, Dave, here is a compilation of seven of the “best Boston cream pies goin’!” in the Boston area.

Come eat the delicious pie where it all began! The inaugural chef at Boston’s Parker House Hotel is credited with creating the Boston cream pie recipe in 1856, and it has been a menu staple since. The original recipe is made of marbled dark and white chocolate, with a toasted almond exterior. And it most certainly is something to write home about.

I can quite seriously say I have never gone wrong with any baked good at Flour Bakery. Their Boston cream pie is no exception! It may not be traditional, but the coffee-soaked sponge cake is melt-in-your-mouth delicious. Combined with the vanilla cream center and chocolate ganache coating the top, this pie is simply decadent.

Union Square Donuts was literally voted the best doughnut in Boston. So it’s no surprise that their Boston cream is in the running for the “best doughnut goin’.” The doughnut filling is the perfect vanilla flavor, and the delicious cake is topped with an amazing Belgian dark chocolate frosting. Prepare to eat your prize there, though — I have heard they don’t travel all that well! Though you probably wouldn’t be able to wait until you get home to eat it anyway!

If you are looking for an old-school diner vibe — and a delicious vegan twist on an age-old classic — head on over to Veggie Galaxy in Cambridge. The 100% vegan confection boasts a delectable vanilla bean pastry cream sandwiched between two layers of yellow cake and glazed with a heavenly dark Taza chocolate ganache.

The Boston cream bismarck is a staple at all four of Blackbird Doughnuts’ Boston-area locations. This buttery brioche doughnut is stuffed with a luscious vanilla bean custard and topped with a rich chocolate ganache. It can be a breakfast, a snack, a dessert — or a full meal if you want it to be! You can even pre-order your treats online to skip the wait!

Blacker’s Bakeshop in Newton boasts an absolutely delicious Boston cream pie, which comes highly recommended by some of our Boston Mom’s Blog contributors! As if the taste of the pie wasn’t good enough reason to rush to this bakery, it is also a kosher, pareve (dairy free), and nut-free bakery, which offers vegan options, making it a wonderful option for those with allergy concerns.

This one’s official, folks. For my Dad’s 61st birthday, he held his two-day-old granddaughter for the first time and was presented with a Boston cream pie from Montillio’s Baking Company in Brockton. He deemed it one of the happiest days of his life and said the pie was, in fact, the best Boston cream pie goin’. I agree. It was delicious. That whole day was pretty darn sweet. Go there. Eat the pie. Make a toast to Dave while you’re there. 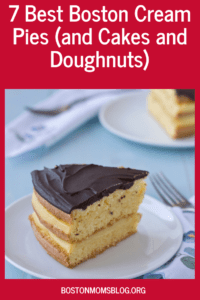