Odds are that if you have children in daycare or elementary school, you have at least heard of sunflower seed butter — a peanut butter alternative that is nut-free and thus mostly safe for those children with severe peanut allergies.

My first introduction to sunflower seed butter came four years ago, when my oldest son attended a completely nut-free daycare. His providers sent home a multi-page pamphlet on what to pack him for lunch. (I thought it was, as the kids say, a bit extra, but it ended up being more helpful than I expected.) This led me to pick up our first jar of sunflower seed butter. Two daycares and one elementary school later, it is still a staple in our home, even though neither of my children has nut allergies.

Sunflower seed butter is not peanut butter, but it’s not bad. While it definitely lacks the creaminess of peanut butter, it still has a nutty taste. Because of its much different consistency, there is an art to using it that took some trial and error to figure out.

Always have two jars at a time.

If you have ever used natural peanut butter or almond butter, you are familiar with the separation that occurs between the oils and the butter. The same thing happens with sunflower seed butter. When you open a new jar, mix before using to recombine the oil with the butter.

However, even if you have mixed your sunflower seed butter well, it will start to dry out, and the final 25% percent of the jar will be difficult to work with, tearing bread and causing frustration (especially if you are making lunches in a rush, which I might be guilty of). That is when the second jar comes in handy. Open your second jar, scoop out half a teaspoon of the oil gathered on the top, and put it in your nearly done jar. Mix, and you will find your first jar is now just like new.

Sometimes when I have two or three servings left in a jar, I’ll scoop it into the newer jar and carefully mix it up to consolidate the two.

The first time you make a sunflower seed butter sandwich, don’t scoop out a giant bunch on your knife and expect to create a tasty and solid layer of creamy goodness. It is much runnier than even an organic or natural peanut butter, especially when you have just opened a jar.

Because of that, start with a small amount on your knife until you get used to the consistency. It will sink more into the bread than peanut butter will. If you have used too much, it also oozes out of the sides of the sandwich when squeezed by tiny hands, so you will have to be mindful of that when you put your sandwiches together.

When you have to use sunflower seed butter in lieu of peanut butter, a lot of prepared lunch items become unavailable to you, including one of my sons’ favorite treats: pre-made crustless sandwiches (like Uncrustables). There is a sunflower seed butter version of those sandwiches on the market, but they use white bread and I prefer to give my sons wheat.

So I figured out how to make my own without having to buy a special crustless sandwich cutter — by using a pint glass jar. I make our sunflower seed butter sandwiches, then press the opening of the pint glass into the sandwich. It is the perfect size to make a crustless sandwich pocket. You don’t even have to seal the edges — the glass does a good job of doing that when it cuts the sandwich. 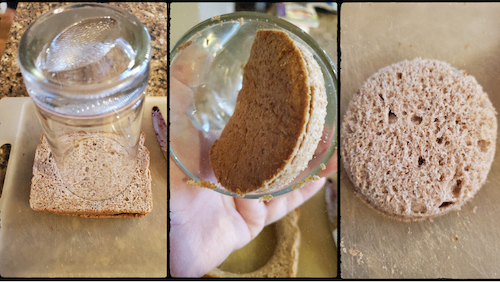 Though my sons don’t have nut allergies, sunflower seed butter has a place in my kitchen — and we’re happy to make the lunch table safer for the kids around us. Free School Lunch :: For Me, It’s Not About the Money 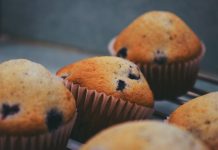 I Didn’t Think I Could Bake, and Then I Got Allergies 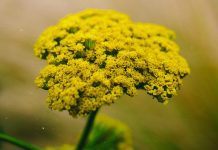 What Is That Yellow Stuff? (Welcome to Allergy Season!)